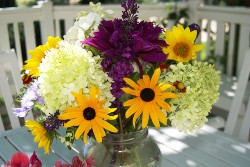 This is the third in a continuing series on how small differences can make you stand out from your competition in a big way.

There was a big storm in the northeast last weekend. Bob Poole had major damage to his house; he said he felt like he was in The Wizard of Oz. He called several companies to come over and assess the damage. The first one arrived with a bouquet of flowers. He said, “Nobody else brought flowers. I bet they spend over $1,000 a year on flowers. They will more than recover that on this one job.”

Here’s another example. I recently wrote a guest post about writing great headlines. I suggested using magazines to get ideas for headlines, and gave a few examples of how to change the headlines so they worked for your business.

A small thing, but it made a big difference to Kiesha, who said she’d read many, many articles on writing headlines, but “this is the first that actually takes the time to do a brief, yet highly effective comparison to demonstrate how to actually make those magazine headlines apply to blogging! Awesome!”

What small steps could you take to be remarkable? Or, are you already doing something that makes you stand out? Tell us in the comments.