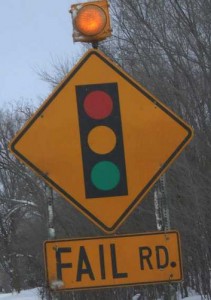 Newsday (a newspaper in the New York area) just spent $4 million (US) putting their web site behind a paywall.

Total earnings so far, $9,000. Not much of an ROI. And a pretty big web marketing failure.

Apparently, the site is awful. It’s hard to navigate. Many of the links are broken. The reporting isn’t very good.

When not to charge

Newsday apparently thought that putting content behind a paywall would work for them the way it’s working for The Wall Street Journal. The Journal’s content, however, is perceived as more valuable, and more focused, namely business news.

In addition, many companies pay for employee subscriptions. No company will pay for Newsday – it’s too general, and not even a very good newspaper.

If you’re going to charge, charge for something that matters to your audience. Charge for convenience. Or exclusivity. People will also pay for convenience (say taking 20 articles scattered around your site and packaging them together with new material).

Don’t get so caught up (like Newsday did) in your own needs that you forget what your subscribers and clients want. Or what they will think is worth paying for.