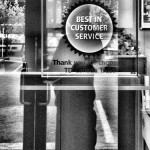 In a worldwide recession, keeping your customers happy is critical. And, at any time, it’s always cheaper to retain new customers than to acquire new ones. One way to do this is with great service. Here are two examples of companies that got service right.

A book newsletter recently featured an offer for free chocolate. Send your name and address and get chocolate! I was all over that and immediately responded.

A few days later, I got back a very nice note from the VP of marketing and sales at the chocolate company, saying that due to overwhelming demand (and cross-posting of the offer in places it didn’t belong), they could only offer the chocolate to bookstores and retailers.

However, as a consolation prize, they offered a discount to anyone who ordered a box of chocolate from their site before Valentine’s Day.

I was disappointed (though not completely surprised) to be told I was ineligible for the free chocolate, but I sent back a note asking if they could send the chocolate instead to the indie bookstore down the street (and included the name and address) – as a random act of kindness.

Well, I got another note back asking for my address, and saying that they would try to send me some chocolate after all!

Now, that’s service, and bravo to them all around!

Meanwhile, Bernd reports that great service is taken very seriously in Japan:
“Once it was butter in a glass jar. Upon opening we found a black residue in the cap and near the top rim. My wife called the toll-free number, the area salesman (who normally visits the retailers) came by the same day to pick it up, with profuse apologies.

Few days later we got a ready-made postcard, apologies for the inconvenience, case under investigation.

Week later a letter, with apologies for the inconvenience, “what looked like mold was confirmed to be mold. We are investigating the manufacturing process to prevent recurrence.” Letter was in a box with more butter jars than we had bought and two other products from the same company. They wanted us to keep their name in good regard.”