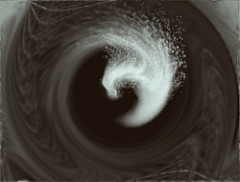 Monday, I showed you two ads, one by Samsung and one by Apple.

Both are about electronics.  Both have multi-million dollar campaigns behind them, sponsored by large well-known companies.

The Samsung ad starts off, “Nobody aspires to be second best, or make an average entrance…”  Good, it’s telling me that I can be better than average! Unusual and remarkable.

But towards the end, it goes off the rails. It turns all of that into an ode to themselves, rather than about the people buying the phone.

“We have the best and brightest screen on our fastest phone ever.  Because we’re Samsung, and that’s just the way we’re wired.”

The phone spins. You see the logo over and over, while the announcer repeats the product name.

Lastly, the words “The Wonder of Samsung” appear on the screen, along with the logo, and those of retailers that sell the phone.

You’re not better, Samsung is better.

In contrast, the Apple ad says,  “Are you curious about new ideas? Do you want to learn a new language? Or just a new word? ..Uncover a hidden talent?  There has never been a better time to learn.”

The announcer never mentions the name of the product or who makes it.  He never says “we” or “our” only “you.”

The Apple logo and the words “Ipad2” show up only briefly, at the end.

The entire experience is about the viewer.

And that’s why it works.

Focus on your audience

Run the one-minute marketing test on your ad or your email or your web page.  See who you’re really talking about.

Write ad copy and promote your products and services to fulfill your audience’s desires, what they want to achieve, or save, or earn. They’ll be entranced.