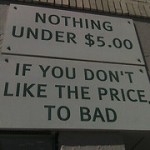 It’s easy with the speed of blogs, spell check, and online tools to dash out a quick post, a comment, or even a brochure that’s full of mistakes. Typos do happen, but sometimes a mistake can just make you look foolish (and hurt your credibility).

Here are ten of the most common English grammar mistakes and how to stop them before they stop you.

Your refers to something that belongs to you. Use it to indicate possession of something, such as “your toothpaste” or “your shoes.”

You’re is a contraction of “you are”, a noun (you) and a verb (are).  It is usually followed by an adjective describing something about you or something you are doing, such as, “You’re tired,” or “You’re tall.”

It’s is a contraction of “it is,” use it to indicate an action or a description of something.  “It’s raining.”

Its indicates possession.  “The dog is chasing its tail.”  The tail belongs to the dog.

Lose: indicates that something is missing.

Loose:  describes something that’s not restrained  (an animal that has gotten away, hair that has been taken out of a ponytail).

A compliment is a kind word or expression of admiration for something.  “Nice shoes”!

When one thing goes well with something else, they complement each other.  “That blue shirt complements your blue eyes.”

Effect is the result.  “The rising price of oil had an immediate effect on the price of food.”  The result of higher prices for oil is higher food costs.

It is also used to show the way one thing influences another.  “The effect of the new law banning smoking in public places has been to reduce the costs of health care.”

Use an apostrophe to indicate possession.  Examples are “Bob’s shoes” or “the cat’s toys.”

Don’t use them to make something plural!

“There” is a location.

“Their” is used for something that belongs to others (their house, their books).

“They’re” is a contraction of “they are.”

“Too” means also or in addition. ” I like chocolate too!”

“Two” is a number.  “My friend Bonnie has two kittens.”

This one messes me up sometimes, but I try to remember “that” is specific, and “which” is not.

That copy machine is broken.

“Whose” is possessive.  “Whose bike is that”?

“Who’s” is a contraction.  “Who’s the guy riding that bike”?