Playing a potato? I’m sure you (and I) never thought of a potato as an instrument.

Baked as a side dish, yes. Turned into french fries, absolutely. A basis for potato salad, sure. You can even make a science project that uses a potato as a power source for a lamp.

But not an instrument.

Same thing for carrots and leeks.

Put those things together and they don’t really sound terribly musical. In fact, the first thing that comes to mind isn’t music, but soup.

It can be done though.

Nan Weidong and Nan Weiping, two brothers in China, have become known for just that. They drill holes in the vegetables, and tune them with an old electronics tuner.

Sure it sounds a bit odd, but it works.  In fact, they’ve  become very popular performers, and and earn up to $8,000 per show.

Being a musician, that’s ordinary. Playing the potato; that’s different.

They’ve found a way to clearly and absolutely differentiate themselves from every other musician on the planet. Who else plays the potato? Nobody.

Some call it an edge, others a “game-jumper”, still others a USP (unique selling proposition). Whatever you call it, it’s something that makes you stand out. and makes you different enough that people will talk about it.

If you have no musical talent (or vegetable carving skills), there are plenty of other ways to do this.

You could make something complicated really simple (like Gary Vaynerchuk did with wine – he talks about it like a layman, not like a wine snob). Or, you could do something slowly, or by hand, that most do very quickly or by machine.

Be worth talking about, and your fame will spread.  It might even spread all the way to China. 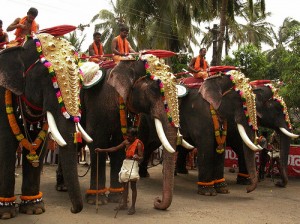 Jennifer on LinkedIn wanted to know if it was worth a large investment of money to redo her web site. She’s an interior designer and isn’t happy with the way her site currently looks. She got lots of answers.

Some advised her to concentrate on search engine optimization (because graphics don’t matter as much as marketing strategy), others recommended she insist on a content management system (an MS Word like interface that makes it easy for a non-technical person to change the site’s content).

I’ve heard others in similar situations insist that words don’t matter because nobody reads.

The graphic designer focuses on the design, the wordsmith on content, and the SEO expert on optimization.

The truth is that the elephant, and the Web site, are all of those things: side, tusk, trunk, words, design, marketing strategy, and traffic.

A web site with poor design, that’s hard to use, or read will not be successful. A site with poor wording will not convince anyone to buy; one with no traffic (or the wrong traffic) will not make sales if nobody sees it.

The design, the colors, the layout, the traffic, the marketing strategy (her points of difference, her story, her call to action) must all work together. Without legs the elephant will fall. With no trunk, it can’t eat.

With no marketing strategy or poor traffic, the web site will founder. Take away any single one, and the whole thing fails. Look at the whole elephant (and the whole site), not just pieces.

Danielle is starting a new business offering virtual assistant services. She wants to send out a postcard offering her services and asked for help on Marketing Exchange (12/29/08). She said she wanted to offer “off-site business support services that free their time and allow them to focus on revenue-generating activities.”

As I was reading this, I noticed that a sheet of paper had fallen out of my files. I picked it up and saw that I’d written Strategy and Tactics on the top. It said, “Strategy: How can I achieve my goal? Tactics: Have you identified your prospect’s problem? Have you presented your solution in a way that makes them want to do business with you? Have you established trust?”

Danielle has chosen a tactic (sending a postcard), without a clear idea of what her strategy is. She has no clear picture of who her clients are, how she helps them, or how she creates trust.

What’s your strategy for the new year? How will you create trust with potential new customers and keep it with your current ones?