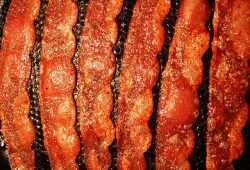 Most  business marketing doesn’t focus on what they’re really selling.

It’s full of vegetables (with not nearly enough bacon),

Most people like bacon, in fact they like it much better than say brussels sprouts.  Or kale.

The trouble is that many businesses sell the kale, which is good for you (instead of the bacon, which is delicious).

What is  your business really selling? Kale or bacon?

Here’s what I mean.

Say your business is growing and you need a part-time bookkeeper.  You hate working with numbers, and wrestling with them is taking hours out of your day. If you’re going to think about numbers, you’d much rather figure out how to buy that new Macbook you have your eye on.

So you talk to some people and get some recommendations for bookkeepers.  The first one highlights his twenty years of experience, several certifications, and a long list of services (bookkeeping, bill paying, checkbook reconciliation, etc.).

At your first meeting, he looks at your books and advises you in the strongest terms to reduce your debt.  Sound advice, but it’s not  “fun” or appealing.  Rather like being told to eat kale.  You know it’s something you should do, but you’d much rather reach for the bacon.

Rather than going on about her credentials, she promises to get you an extra two hours a day.  Except for a monthly report, you’ll never have to look at numbers again. Just send her all the paperwork, and she’ll handle it.  She says she’ll make the entire process easy and painless, so you can focus on your work, rather than your books.

And, instead of trying to “sell” you on debt reduction (vegetables), she shows you how to get the money to pay for that laptop (bacon!).

Which one do you think you’d hire?

What you really sell

Think about this for your own business. What is it you’re really selling?

The authors of get rich (online or off) books aren’t selling books, they’re selling hope.  So is Weight Watchers.

What people really want isn’t the service or the product. They really want the result.  What will they get by buying from you or hiring you?  Happiness?  Hope?  Money? Glory?

Rational arguments (like the first bookkeeper’s advice to save money and cut back), aren’t nearly as powerful as emotional ones (new toys!).

Think about your own business. Go look at your web site or your other marketing materials.  Are they selling vegetables? Or bacon?