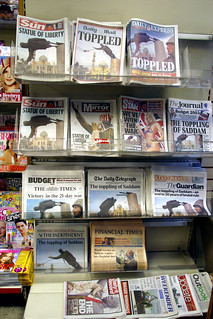 Do you know one of the most important headline writing rules? And have you been breaking it?

Here are some random headlines I took from Google News this morning:

The Other Guys’ Captures Audiences at Weekend Box Office

What’s wrong with these headlines?

There’s a common problem with each of these headlines.  In fact, every one of them has broken the first rule of writing headlines.

What is that rule?

The primary function of a headline is to arouse interest, entice the reader… and encourage them to keep reading.

Each of these headline writers has failed that test.  They’ve all given the entire story away right up front.  You can tell instantly who won the tournament, the outcome of the election, and the box office leader that weekend.  Anyone seeing the headline already knows what happened, without bothering to read the entire article. There’s no reason to click on the link or read further.  That also means there’s no reason to go to the site and read more articles.

The purpose of a headline is to get readers thinking or wondering.  It piques curiosity.  In other words, a good headline is the flag that waves down passers-by and says, “pay attention, you’ll want to know more about this.”

Five times as many people read the headline as the body copy. Five times.

A bad headline depresses interest in reading further.  An article or post with headlines like these will get fewer clicks. That also means fewer ad impressions, fewer readers, and fewer potential subscribers or buyers.

Before you write a headline for your ad, or your blog post, think about whether you’re giving the whole story away in that headline.