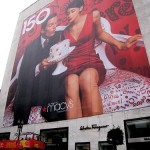 The Los Angeles Times reported (April 9, 2009) that the Online Publishers Association has just approved new extra-large Web ads. The association’s numbers show that web surfers are ignoring standard banner ads. So, in an effort to reach more people, they are launching three new larger ad formats: “pushdown” ads, which open to display a bigger ad; a”fixed panel” ads that appear to be part of the Web page, but scroll up and down as the user does; and XXL ads, which have pages that the user can turn.

Looking at the LA Times site right now, there’s an ad for The University of Phoenix (an online university). I have a degree (from a brick and mortar school), so this ad is irrelevant to me. I won’t click on it, no matter how big it is, how much it flashes, or how many times I see it.

Bigger isn’t better. Relevant is better. What does work? Ads that appear when someone is already looking for something. Communications about something related to the content (such as a car ad next to a car review).

Blindly shooting and hoping to hit something won’t work.. no matter how big the ad.

What’s your marketing strategy? Are you targeting carefully? Or spraying and praying?