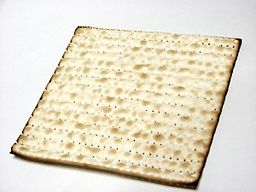 Matzo, if you’re lucky enough to be ignorant of it, is unleavened bread — a plain, flat, fairly tasteless cracker, often referred to as “hemstitched cardboard.”

Every year, Jews must give up bread, noodles, cakes, and many other foods made with leavening and eat matzo for a week instead.

Nothing much changes with matzo.  It’s been made the same way for thousands of years.  Mix the flour and water, watch it carefully, roll it, and bake it.

Since everyone observing Passover has to eat matzo, the matzo makers have a loyal customer base that must buy their products every year.

According to a recent article in the NY Times, the Streit’s Matzos factory has been making matzo on New York’s Lower East Side pretty much the same way since 1916. They haven’t really changed their equipment since World War II.  The founder’s great-grandson says,  “As long as they don’t change Passover, we have built-in sales.”

Even with built-in customers, how can they succeed year after year when so many other businesses fail?  Couldn’t someone come up with a new way to make matzo?  Cheaper? Or faster? It’s just hard crackers, right?

The mixing, rolling, and baking sounds very simple.  But the truth is much more complicated.  Making matzo is hard.

There are all sorts of kosher laws governing the ingredients and the preparation.  You can’t use commercial dough softeners and additives (they’re not kosher).  The equipment gets clogged regularly, and you may have to toss out batches of dough that sit too long.

The staff (most of whom are not Jewish) require special training.  As the article says, one jar of bacon bits tossed in the line and it’s all over.

However, the best way to succeed when faced with global competition may be by following “the matzo principle.”

“The matzo business offers a lesson for how companies can succeed in an increasingly competitive, global marketplace: do something that’s really, really hard. ”

If your business is easy to replicate, then someone, somewhere (probably China) is going to undercut you.”

On the other hand, a luthier who makes guitars entirely by hand, a graphic designer who offers 48 hour express logo turnaround (at an appropriate price), or a trucking business that transforms itself into an express medical delivery service (with refrigerated trucks) are all difficult for your competition to copy.

They can’t easily recreate what you’re doing, and they can’t outsource your service.  Voila, you have no competition.