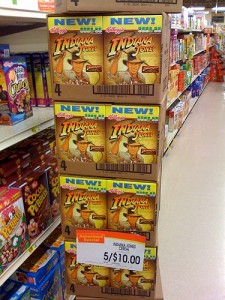 When advertisers talk about “brand awareness” or “branding” campaigns, they mean ads that don’t sell directly, but instead try to generate interest in their product (or brand). The idea is that more advertising and more repetition will create a stronger recall of the product, and (with luck) eventually generate more sales.

Sometimes, however, this can go terribly wrong. I was watching the baseball game the other day and wanted to scream. My team won, but the broadcast was driving me mad.

There were ads everywhere. The announcers kept telling me about coffee and office supplies. Then, the camera would zoom in on a sign for luxury cars or insurance.

Quiz questions were sponsored by a tea company or another car manufacturer. The crawl at the bottom of the screen (which usually shows out-of-town sports scores) was replaced by more pitches for office supplies. There were pop-ups for other programs and the “regular” commercials too.

Then, I turned on the news and saw that the local news sports scores were sponsored by a phone company (whose logo was everywhere). Later, Lester Holt of NBC was forced to recite what was essentially an ad for a Farrah Fawcett program airing later that night.

I don’t drink much coffee. I don’t own a car (sorry car companies), and I prefer other brands of tea.

More interrupting, more advertising, bigger billboards — that’s not promotion that’s aggravation. Give people what they want; not what you want.

If it’s not personal or relevant it’s just clutter and noise. All those companies weren’t really talking to me; they were just jumping up and down, waving their arms, and yelling, hoping somebody would notice them (and calling it a brand awareness campaign). I confess I’ve never had much enthusiasm for brand awareness (being a direct marketer), but if you truly want people to be aware of your brand, do it in a way that interacts with them. Give them something of value (not just yourself). And, don’t try to bribe them either.

A few days after the baseball game, I saw a car ad which seemed to be saying that they would pay new car buyers to text, tweet, and Digg about their product. Buy our car, it said, and we’ll pay you to use social networking to talk about our cars. True viral marketing and social networking work when they’re motivated by genuine enthusiasm for the product, not greed.